Another Day at Disneyland.

Posted on February 27, 2012 by CynthiaDiamond

I say that as if it’s a BAD thing.

Today is my birthday. I am now 36 years old. And I’m still nothing more than a big kid with big boobs.  And luckily my amazing husband likes to indulge that…

…Both parts really but this entry is about the big kid part of me.

So to celebrate the big 3-6 Mr. Max took me off to Disneyland to celebrate in STYLE! And this time I remembered my camera!

But I forgot to charge the battery.

Regardless of that, I still managed to get some good photos and take my new camera for a test run before it pooped out on me. 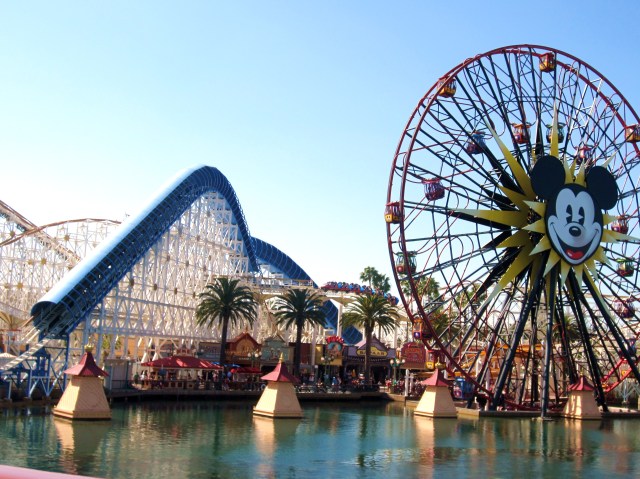 Tons of pics under the cut!

Max and I are annual pass holders which makes the whole D-land experience far different from if you go every once in a while. When I go to Disneyland I ride a few of my favorite rides then I just enjoy being in the park and the atmosphere… oh and the food and drinks. Can’t  forget the food and drinks. When Mr. Max and I head over to the Magic Kingdom we take what we have dubbed the “adult tour” of Disneyland. This means we tend to ride a few of our favorites then spend the rest of the time strolling about and hitting some of the really great restaurants and bars the park now offers.

One of our first stops was the Cove Bar at Disney’s California Adventure. It’s the bar that is located at the Ariel’s Grotto restaurant (character dining downstairs for the family, awesome bar with lobster nachos upstairs.  Awwwww yeah).

You also get a really great view of one of my favorite coaster’s in the park, California Screamin’. 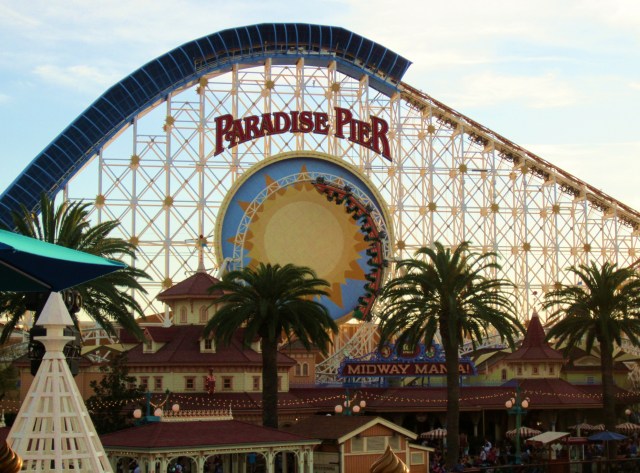 You can also see the sign for the new Toy Story Midway Mania ride there. That ride is GOBS of fun! Speaking of which, Here’s some quick snaps of the Midway Mania atmosphere.

One of the carnival posters on the wall. 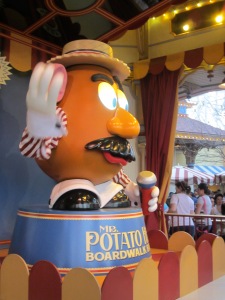 I should Just call this post the California Adventure Appreciation Post.  Most of my photos are from here. 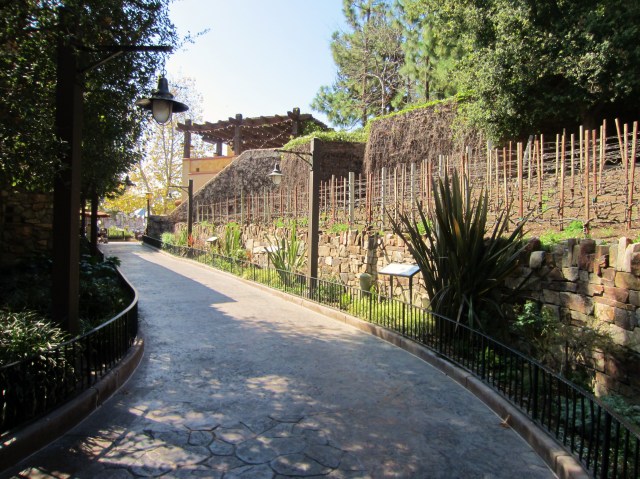 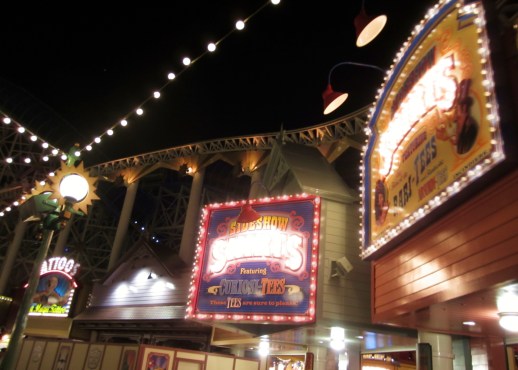 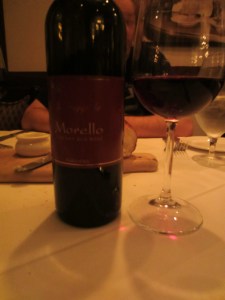 Last food picture I promise. An AWESOME bottle of wine with dinner.

I took the above photo at an AMAZING steakhouse called Steakhouse 55. Its located inside the Disneyland Hotel and it is magnificent!  We went there for our Thursday night dinner and we fell in love. I only wish I had enough room to try the 22 layer chocolate cake…yes I wrote that correctly.  The slice was as big as my freakin’ head! 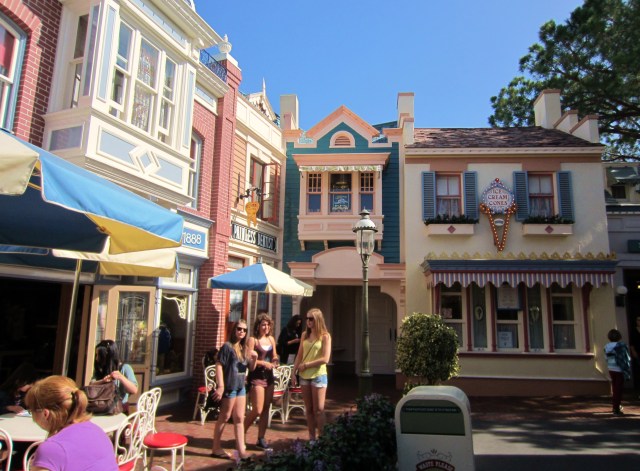 A little corner of Main Street a lot of people miss. Good ice cream to be found here! I wanted to take more photos of Disneyland but alas, this is where my camera battery started to die a horrible death.

I love the Disney showcase stores that are along Main Street. They always have beautiful collectibles. I took this picture mainly for my friend Julie and my sister Lisa. Julie is a huge Belle fan and Lisa has always loved Cinderella (In fact, it’s why my name is Cindy).

I myself, love the Haunted Mansion. And I drooled over these adorable statues they had on hand. Though my favorite collectible was this one: 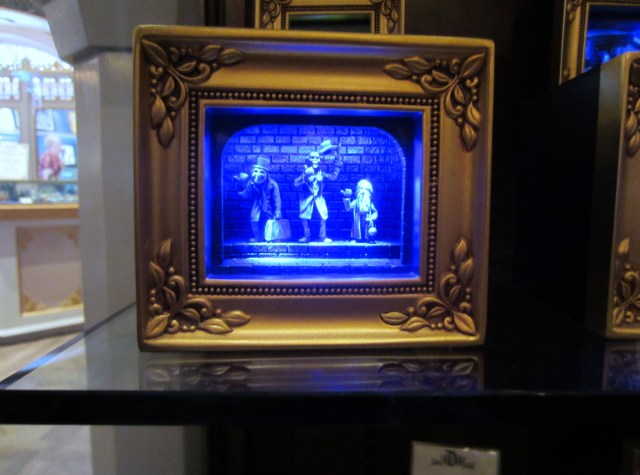 ADORABLE! If I had the money it would have been mine!!

My other favorite ride, Pirates of the Caribbean.  I was testing out my dim light setting on my camera. I’d say it worked rather nicely! The treasure room is my favorite room on the ride. MUCH love to the pirates!

I wish this picture came out better. I’ll have to try again next time. Here’s the Blue Bayou restaurant. We did manage to have dinner there. So delish!!

Here is a segment I like to call Max wearing stupid hats. We did this simply to amuse friends via text message. 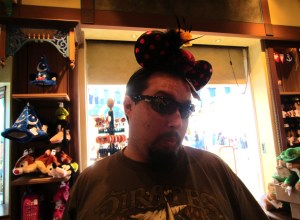 We tried to capture the same comedy with me but I just don’t have that “specialness” that my husband has. 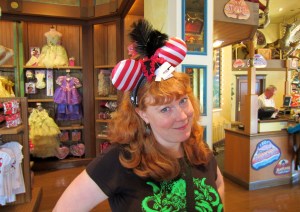 HeeHee… DORK! Actually, he can’t stand the flash at the end of Space Mountain.

After that, my camera pretty much died. But I managed to snap a few photos with my phone.. until THAT died too. But I DID get some photos of ElecTRONica at DCA!

It’s a fantastic evening event they’ve been doing at DCA with music, games, cocktails, and other awesome stuff all in theme of TRON: Legacy. Unfortunately its just a temporary thing so it will probably be gone in a month or two. DRAT! 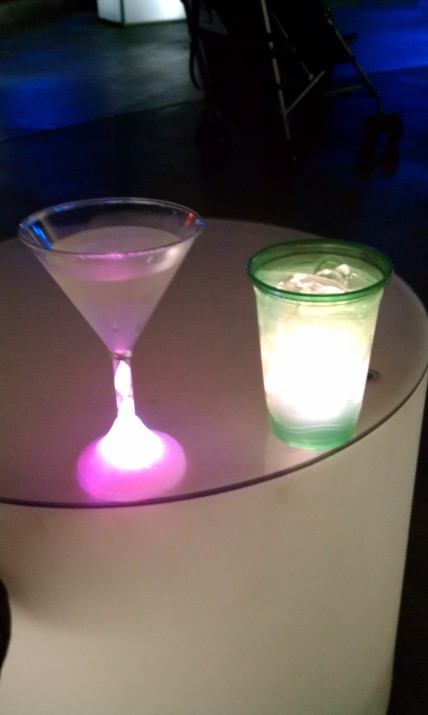 I lied…THIS is the last picture of food and drinks you’ll see. I had to take photos of our glow in the dark drinks. We’re collecting the glowing Martini glasses. We have three, currently.

We ended the night playing video games at Flynn’s Arcade. It’s a blast to see all the people from my generation go insane at the sight of all the 80’s arcade games and all the young kids look horribly puzzled.

Hopefully on our next venture, I’ll be able to get more photos in Disneyland. Not sure when we’re going next but I definitely won’t turn my nose up at another venture to the Happiest Place on Earth anytime soon!