Posted on June 4, 2012 by CynthiaDiamond

Honest and truly I do! Sorry about the hiatus. War recovery tends to take longer than expected what with the laundry, the cleaning, the extremely long shower to get all the dirt off, and so on. But I’m back, refreshed, and happy to be back! Potrero War this year was extremely awesome. I spent the week with some amazing friends and watched some great people get some high honors.

Oh, and there was rum. 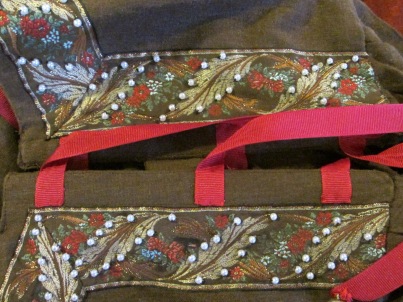 I also have an update over at Costume Nonsense. I didn’t do any sewing for War but since Coronation was right on its heels (and I was asked to be on Royal Court) I hauled out my 12th Night dress, spruced it up, and took photos that didn’t involve hunchback jazz hands! You can check it out here.

Here are some highlights from War! 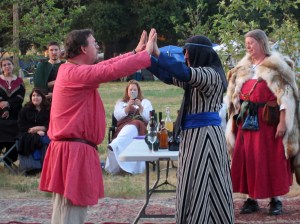 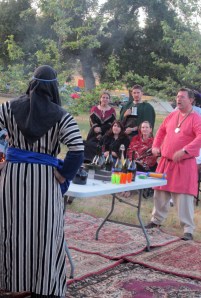 My friend, Lord Levi Ben Daniel (aka, Levy) was asked to be an apprentice to Master Donald, a really terrific brewer. Here’s Levi’s apprenticing ceremony. Many a tasty beverage was sampled! 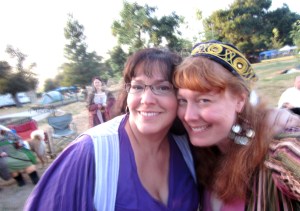 Lord Bourkie and Lord Guy of Aydon (aka, Zack and Isak) Our two Iron Maiden Archers.

Our newest rapier fighter in Iron Maiden, Lady Catriona (aka Rebok) and Queen Cassandra pays the rapier field a visit.

The really lovely entrances to the Drafn and Myrmidon encampments, two of Caid’s warbands.

And of course, FIGHTING!

Ending this post with a very special event.  My friend Lord Conrad Faust Tindel (aka, Tink) received his white scarf on the field for his awesome rapier skills. Getting your white scarf in rapier is a lot like getting your knighthood. So he’s now Don Conrad… I’ve been calling him Don Tink though. Congrats Tink!

Coming up next, Labyrinth Ball! So much sewing to be done! And I have some other sketches and whatnot to upload soon.  Time to get back on track!